Read some of Sarah’s articles here. Sarah publishes articles regularly on the site, writing about her books and the themes they cover, as well as other topics, so be sure to check back on this page to read the latest content.

Art as Memory – the Documentary Canvases of Karl Stojka, a Roma in Auschwitz-Birkenau 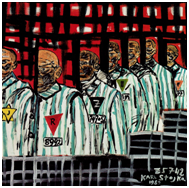 Photographs provide us with heart rending documentary evidence of the Holocaust. Everyone will be familiar with the black and white photographs of prisoners in concentration camps; the stark monochrome evidence that began to appear after the war of the atrocities committed by the Nazis against those they wished to exterminate or work to death. I studied these photographs in great detail as I was researching A Berlin Love Song, particularly the ones I could find that related to the Zigeunerlager, the Gypsy Family Camp in Auschwitz-Birkenau. They enabled me to imagine, if this leap of imagination into such a living hell is at all possible, what it might have been like to live and die in this terrible place. However, it was long after my manuscript was finished, edited and sent off in its final draft to my publisher, that I came upon the incredible paintings of Karl Stojka. Quite by accident.

Circus historians almost all agree that the modern circus was first created in England in the eighteenth century by Philip Astley, a former cavalry Sergeant-Major turned showman. On his discharge from the army, Astley, a talented horse-breaker and trainer, settled in London and opened a riding-school near Westminster Bridge teaching the feats of horsemanship for which he himself became famous.

The Forgotten Holocaust: the genocide of the Romani community during the Second World War 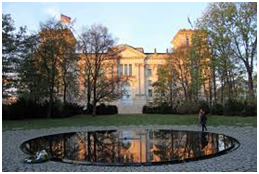 The long silence about the fate of the Romani community at the hands of the Nazis during World War II has been called the forgotten Holocaust. For decades after the end of the war, the genocide of the Zigeuner, the German term for Gypsies, was almost totally ignored. And yet the Nazis and their allies killed up to half a million Romani men, women and children from all over Europe in the period between 1933 and 1945, in mass shootings and deportations to concentration camps and death camps in the east.

My inspiration for A Berlin Love Song 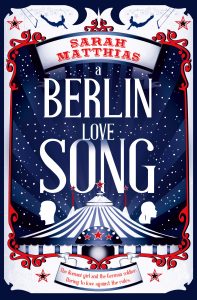 I was aware from a very early age that not all Germans had been Nazis. My father was a clergyman, and one of his closest friends was a German Lutheran Pastor from Darmstadt. They had met in Coventry shortly after the end of the war, as they were both involved in a reconciliation project – The Community of the Cross of Nails.

An Interview with Sarah Matthias 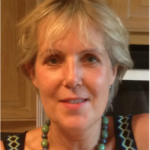 Sarah answers some frequently asked questions in this interview, first published in 2007.

What books did you enjoy as a child?
When I was young I always had my nose in a book and I still do now! My favourite novels were The Little White Horse by Elizabeth Gouge and Five Children and It by E. Nesbit. I can still remember the atmosphere of those stories and the warm fizzy feeling of excitement they gave me inside. I also liked Enid Blyton’s mystery stories, especially the ones about the Five Find-outers and their dog, Buster. I enjoyed these more than the Famous Five. My other favourites were books by Rosemary Sutcliffe such as Warrior Scarlet, The Lantern Bearers and The Eagle of the Ninth.